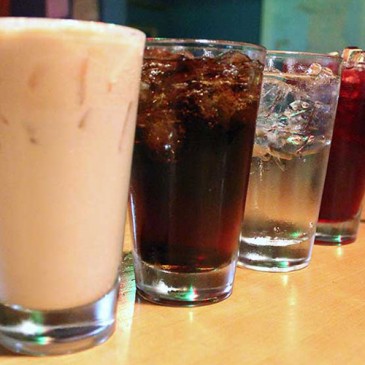 “To Europeans and the fans of their food, sorrel denotes a tart, spinachlike herb used in soups and sauces.  But in the Caribbean and in parts of the Middle East, it refers to a tropical bushy shrub (Hibiscus sabdariffa), also known as hibiscus or roselle.  The plant came to the Caribbean from India via British colonists, and arrived in Jamaica in the eighteenth century.  Its edible red petals taste like a cross between rhubarb and cranberry, a flavor that becomes the eye-opening, sweet-tart basis for the lively, garnet-colored Christmas drink of Jamaica.

To make it, the dried red blossoms (also enjoyed preserved in jams and chutneys) are covered with boiling water and steeped with sugar and sometimes a little ginger, until the liquid becomes syrupy.  Served ice cold, the sorrel mixture is combined with dark rum and diluted with water for a drink that is fragrant, quenching, and intoxicating — a punch that looks like liquid rubies, garnished with vivid, cranberry-red sorrel buds.”

Quoted from 1,000 Foods To Eat Before You Die, by Mimi Sheraton, found at Wide World Books and Maps in Wallingford.